Let’s write in English just for the sake of it, since almost all you Finns understand it anyways and almost none of you foreigners would understand anything if I wrote in Finnish…:) Or perhaps I should write in Arabic hahahaa well I couldn’t anyways. So, my first day ever in Asia… exciting stuff… what would Syria be like, how would it look… I thought it’d be a fairly ”European” or ”Western” Middle-Eastern/Arabic country, but I was shocked when I first entered the airport in Damascus… 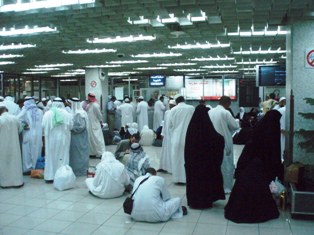 Well to my relief I found out these were all pilgrims from Saudi-Arabia…but to my discomfort they had no understanding of the concept of a queue and so when I tried to patiently wait in line for my visa the Saudis simply came from left and right straight to the desk with a huge pile of passports (probably for the whole extended family;)… On top of that I was told 5 times to move to a different counter to get the visa, nobody seemed to know/agree where it really can be obtained… well finally after an hour of waiting I had my visa and saw my father who was waiting for me. I also met my aunt for the first time in my life. But before moving on – did you notice the funny English in the above picture? If not, here’s a close-up: 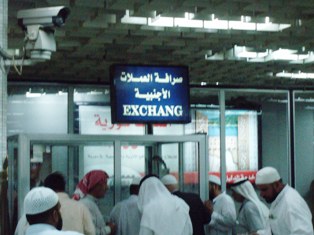 So that’s part 3 (part 2 was added to the end of the previous post have a look!). When we got to our hostel (which is run by Franciscans who have a convent/church in the same building, called St.Paul memorial) I briefly greeted my grandmother whom I had met once before in my life, 17 years ago. Then I went to morning Mass at 7, my first Mass in Arabic. After that we had a delicious breakfast. But then I had to go to sleep since I hadn’t really slept much during the night. I woke up after midday and my dad took me to the backyard of the hostel, where to my surprise I found the following:

Yes, it says (for those of u who understand Latin and Arabic): the Traditional place of the conversion of St.Paul. What? Yes. Read Acts 9 (and 22 and 26): ”And Saul, yet breathing out threatenings and slaughter against the disciples of the Lord, went unto the high priest, And desired of him letters to Damascus to the synagogues, that if he found any of this way, whether they were men or women, he might bring them bound unto Jerusalem. And as he journeyed, he came near Damascus: and suddenly there shined round about him a light from heaven: And he fell to the earth, and heard a voice saying unto him, Saul, Saul, why persecutest thou me? And he said, Who art thou, Lord? And the Lord said, I am Jesus whom thou persecutest: it is hard for thee to kick against the pricks. And he trembling and astonished said, Lord, what wilt thou have me to do? And the Lord said unto him, Arise, and go into the city, and it shall be told thee what thou must do.” (Acts 9:1-6)

Well, as we shall see later, there’s also another site that claims to be that place, but anyhow it was good to reflect upon the message of Acts 9 and be in the city where the Apostle once walked. After a while it was lunch time, the first meal together with my Iraqi family, my grandmother (above) and aunt (below): 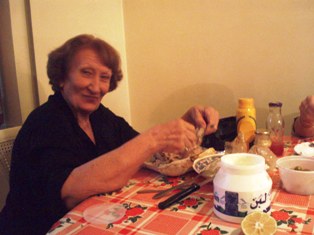 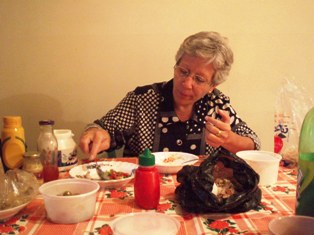 Later I took a walk in the area with my dad and we noticed there was a ”Roman Orthodox” church right next to us. It looked like this – very different from the Finnish/Russian Orthodox churches…and definitely more ”Roman” than Eastern… 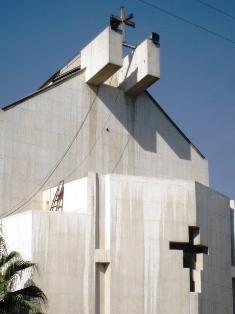 Well there was a priest sitting in the office and I learned two things. First, the people in Syria are incredibly hospitable and friendly. The priest interrupted whatever he was doing and was happy to answer any questions, and so we spontaneously talked for about an hour or two. You don’t really think about time over there that much. The second thing I learned was that the situation with Christians in Syria was extremely confusing. In the end it turned out this priest belonged to the Eastern (Byzantine) Orthodox Church under the patriarchate of Antioch, which however is not located in Antioch but in Damascus. I and the priest: 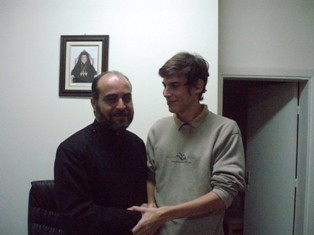 Later in the evening we went downtown to the area of the biggest Mosque. Needless to say the place was full of all kinds of stands and cafés and markets. We bought a couple of cool Iraq-caps and hats. The Mosque was closed, but I got a beautiful picture of the minaret in the moonlight. At night there was always a green light in the minarets illuminating the darkness… I was surprised at how many mosques there were, you’ll see soon. 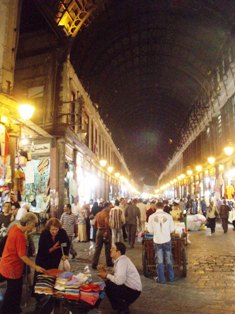 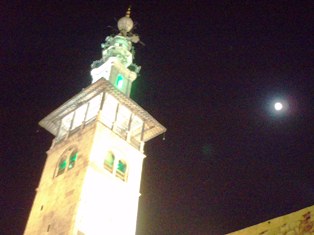 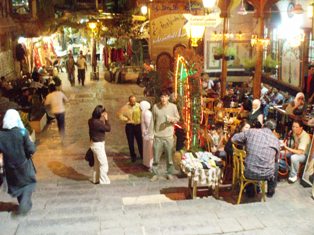 And of course I was greatly impressed by the history – Damascus, I have heard, is the oldest continuously populated city in the world… have a look at this: 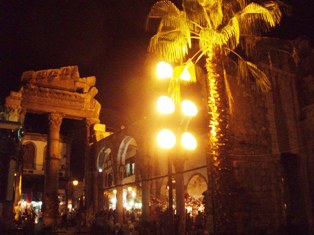 Here you can see Damascus at night. I’m not sure if they’re visible enough, but try to see how many green lights there are – all those are mosques… on the way back we drove past a beautiful fountain. 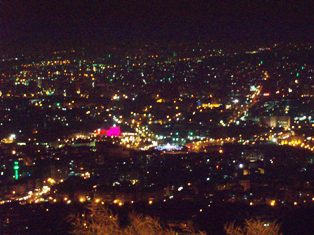 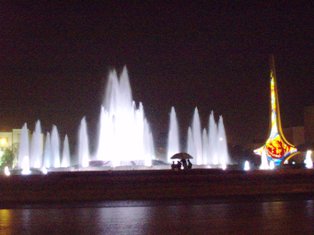 Back to Acts 9… ”Now after many days were past, the Jews plotted to kill him. But their plot became known to Saul. And they watched the gates day and night, to kill him. Then the disciples took him by night and let him down through the wall in a large basket.” (Acts 9:23-25) Well, this is the wall: 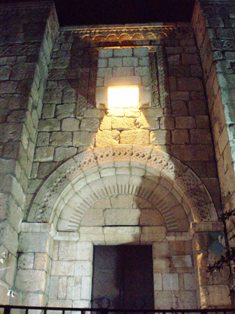 Inside, there’s a basket (no, I didn’t hear anyone claim that’s the same one;) and a picture of the event described in the passaged quoted above: 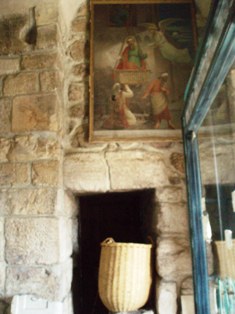 There’s also a church of a sort, but there are no Masses there. Then there’s a souvenir shop and a man who showed yet another example of Syrian hospitality and openness – we only had to open a conversation and soon he had left his counter and invited us to a room to drink tea with him and talk…;) 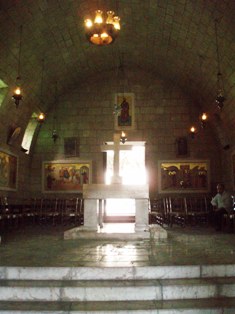 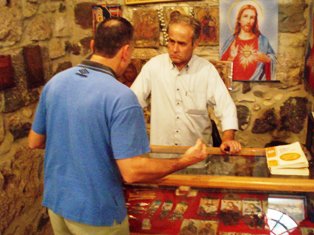 There was also interesting English vol. 4… What are the three theological virtues? Faith… Hope… and… Love…liness? 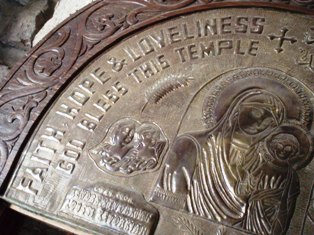 Let’s go back to Acts 9…
”Now there was a certain disciple at Damascus named Ananias; and to him the Lord said in a vision, ’Ananias.’ And he said, ’Here I am, Lord.’ So the Lord said to him, ’Arise and go to the street called Straight, and inquire at the house of Judas for one called Saul of Tarsus, for behold, he is praying. And in a vision he has seen a man named Ananias coming in and putting his hand on him, so that he might receive his sight.’ Then Ananias answered, ’Lord, I have heard from many about this man, how much harm he has done to Your saints in Jerusalem. And here he has authority from the chief priests to bind all who call on Your name.’ But the Lord said to him, ’Go, for he is a chosen vessel of Mine to bear My name before Gentiles, kings, and the children of Israel. For I will show him how many things he must suffer for My name’s sake.’ And Ananias went his way and entered the house; and laying his hands on him he said, ’Brother Saul, the Lord Jesus, who appeared to you on the road as you came, has sent me that you may receive your sight and be filled with the Holy Spirit.’ Immediately there fell from his eyes something like scales, and he received his sight at once; and he arose and was baptized.” (Acts 9:10-18)

Well, I walked that street, it’s still called ”Straight”, and this is the House/Church of Ananias: 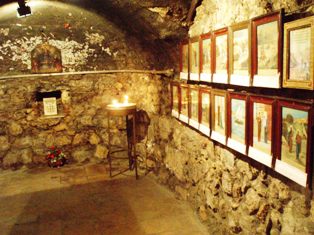 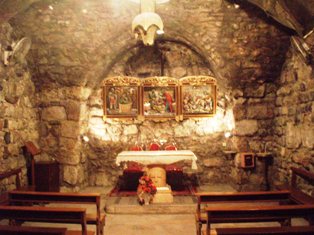 And here we find our funny English volume 5: 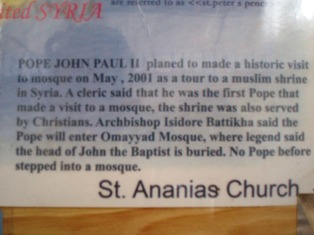 We went back to the Mosque since it was open in the daytime. I had never seen such a veil on a Muslim woman yet, covering absolutely everything… a funny contrast to his Dominican-looking little son:) 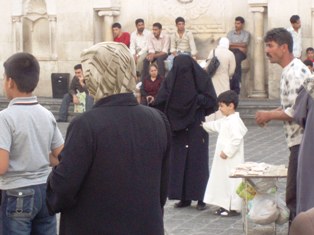 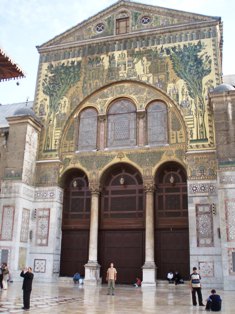 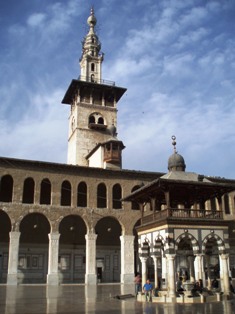 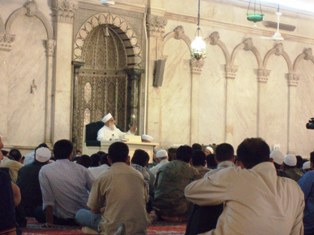 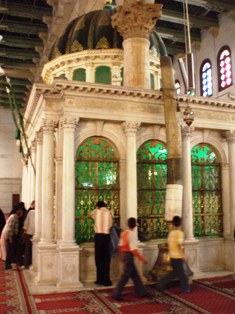 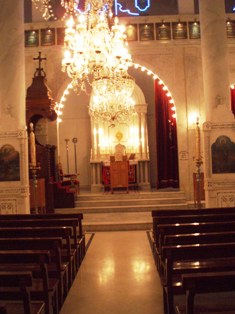 …and finally another Melkite ”Roman” Catholic church, but the Mass seemed very Orthodox to us and so my father thought they were ”Jacobites”. But then they told us they follow the Pope.

When we got home I walked into the office of the Franciscan priest in our hostel, the director, and asked him to explain all the confusion. He explained there are several Christian groups in Damascus and that the word ”Roman” (as I had already guessed) in Arabic actually means what we call ”Greek” (or Byzantine, which basically is Roman since Byzantium was the new Rome). So here’s a super info package for you if you ever go to Syria and wonder what all these churches are:

And this is me with a Finland t-shirt and the Iraq-cap: 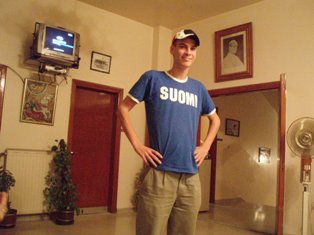 And this is Who Wants to Be a Millionaire in Arabic!!! It’s funny how Syria is really a country between the East and the West, or on both sides, on one channel there can be an Arabic news broadcast criticizing the West, Bush and all that, on another channel Hollywood movies… 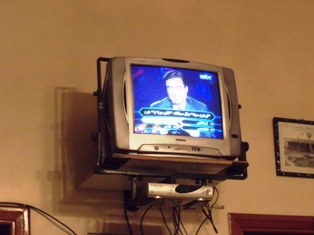 And the world is small… a priest walked in from Germany, and he happened to be one of the two priests in Lechenich/Erfstadt where I stayed during the World Youth Day in Cologne in 2005. We took a picture and exchanded a couple of words. Funny stuff. Ok this is getting too long until next time! 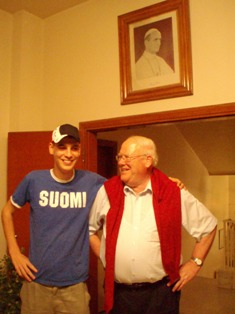