Last Thursday evening I set my feet on the land of Belgium for the first time in my life. There I participated in a very nice meeting of university students from different EU countries in the EU parliament. I stayed in a city called Leuven or Louvain about 20 km from Brussels.

On Friday morning I took the train to the capital of Europe together with an Italian friend, Matteo, who was staying in the same student residence in Leuven. I was told to go to the Grand Place and get some famous Belgian chocolate which I did:) 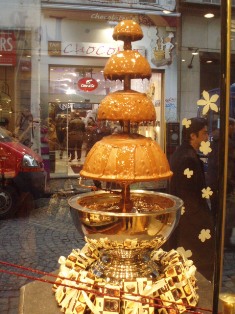 It was also important to me to see the famous St.Michael the Archangel in the picture below below, since precisely because of this – Michael being the patron of Brussels – did I choose him as my patron saint for confirmation. The reasons behind this were not too sublime – I had done a presentation on Brussels for my class in primary school and learned about this monument in Brussels and Michael being the patron of the city. And so when soon afterwards I had to choose my patron I’d choose him as well. But in later years Michael has become more important and so I I’m happy I got to see what is portrayed in the photo below:)

It was a bit ironic that during the first couple of hours as a tourist in Brussels two people came to me speaking French and asking for directions to get to some place:) Overall I enjoyed the French/Flemich bilingual atmosphere a lot:) Hoezo? Ik aime les spraken! Très goed!
Next, I went to visit the Cathedral which looked pretty nice both inside and out. 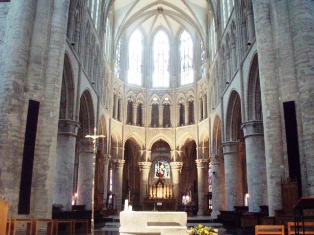 Brussels as a whole didn’t impress me that much, as in there are nicer cities in Europe… my impression was that there was too much grey (though the bad weather, too, certainly had its effect in forming this impression) and too little green and blue (nature/water). There was some kind of a green area though and a beautiful arch seen in the photo below:

After the sightseeing I made my way to the European parliament where I met the nice students from all over Europe. There were some high ranking people representing the president of the EU parliament and the leaders or directors of this specific meeting speaking first, encouraging or even obligating us to believe in the EU because it is our future. Here I stand with one of the main organizers, the famous Toni Romano:)

We had an excellent lunch and got to talk to each other a bit more during the break. After the lunch break we divided into 4 groups, with Finland in the human rights group. We decided to conduct surveys on different issues in our countries and then present the results in Rome at our next meeting in June. There we will prepare a document to be presented to the EU president who in turn will present it to the whole parliament. Cool, ain’t it?

In the above picture you see my friends from Belgium and Holland. In addition to enjoying the Flemish and Dutch they were speaking (I learned they pronounce the g and the ch totally differently in Flemish whereas in Dutch they’re the same but yet distinct from both the Flemish g and ch!) we had some nice conversations – well, we’d better, because for the next hour we were walking around in circles looking for the Belgian friend’s car!

As if this hadn’t been enough, for the next two or three hours we circled around and around in Brussels trying to get out of the rush hour traffic jam! The GPS changed its mind all the time on where we should drive and all it did was drive us nuts! Luckily my memory emphasises the positive, otherwise this post should be called ”I hate Brussels”. But we had a pretty nice time.

When I finally got home to Leuven it was rather late. But anyways Matteo and Didier, a resident from Kongo in the Studentenhuis Arenberg where I stayed, went with me to grab a Belgian beer downtown. Chocolate and beer – that’s what I was told to try in Belgium and I did.
Leuven is a nice medieval city, above you can see the city hall, below Matteo and Didier in the pub.

When we got back home it was past midnight and Didier noticed to his amazement that he had forgotten his keys for the second time in his entire life. We had to ring the doorbell and wake someone up at that time which wasn’t too nice. But we got home and to bed – my bed happened to have an icon of the Black Madonna hanging on the wall above it, which was very pleasant for me as a fervent Czestochowa pilgrim:)

In the morning I woke up and saw the sun for the first time in Belgium! It was a beautiful view from my window up in the 9th floor!

Sadly it was time to say goodbye right after breakfast since my plane was leaving at 11.40 am. Here is Pierre, the director of the student residence and myself posing on Saturday morning:) Pierre was a French speaking Belgian who nevertheless spoke fluent Flemish – and Spanish, and English, and German…and POLISH! Yes we were speaking Polish a lot of the time, a Finn and a Belgian:) 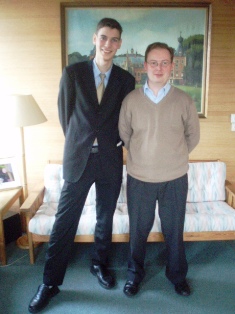 And here with me is Didier again, the funny friend from Kongo. 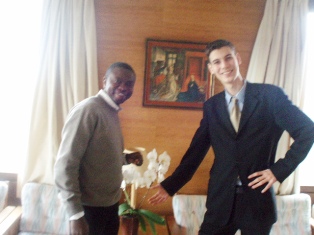 When I got to the airport I learned my flight was overbooked. However, at the gate I learned it was actually half empty because people from another cancelled flight had been listed on this one but didn’t agree to taking that plane or something so anyway I got on it and arrived in Helsinki around 3 pm. This was probably the shortest trip abroad by plane in my entire life. But nonetheless a great one. Met some wonderful people and saw some interesting places – truly a memorable experience. My thanks to all who were there with me.