So on Monday I arrived in Cambridge, the first visit there in my life. While waiting for my host family to come and get me from downtown I was drawn and attracted (actually that’s twice the same word in a German and Latin form;) by King’s College, whose fame and glory I was rather unaware of at that time still. As all the other colleges (there are 31 in Cambridge!), King’s was closed to visitors due to the exam period (but I got around that later as you’ll see – with more photos then:). 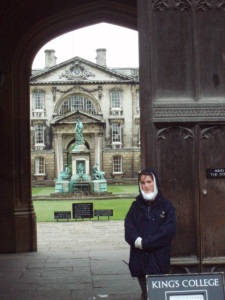 I met the Marchetti family in front of the Fitzwilliam museum after a couple of years’ break. The family lived in Finland but then moved to England and now live there happily, Michele, Anna Maria, Agnese, Rachele and ”baby”, who will be born soon and might be named Paolo thanks to the upcoming Pauline year:) 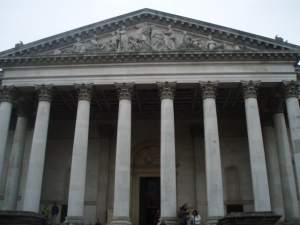 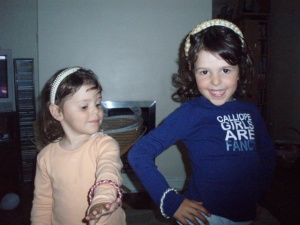 One of the funniest things was that while Frida said ”Emi” instead of ”Emil”, these girls said ”Mil” instead of ”Emil”, so both omitted one letter, just from the opposite ends. To the Italian version, however, there’s a pretty reasonable linguistic explanation, so bear with me. My name in Italian is actually Emilio, where the E is closed (and rightly so) because of the open syllables following. But since the real version of my name is Emil, carrying with it a closed syllable following the E, the Italian tongue can’t keep the closed E there but changes it into an open È pronouncing it Èmil, close to what in Finnish would sound like Ämil.

But if the Italian mind is sharp enough (like my host family’s) it realises that the E in my name should be closed as in Emilio, but since there’s no -io but it’s simply Emil, then the accent or stress has to be shifted onto the i from the E. This way the E stays closed but now you almost can’t hear it since the stress is on the i. And this leads naturally to the E disappearing totally, making my name ”Mil”. Since both Agnese and Rachele repeated Mil all throughout the day for a couple of days, when I’d go to bed in the evening this sweet Italian ”Mil” sound would play inside my head… so here it is for you:)