Yesterday I came back from England. I had a beautiful trip and it’ll take a few posts to relate the whole story but let’s start with the first day right away, the 23rd of May. The evening before my aunt had told my father I should visit my Iraqi family’s neighbours near London. So without knowing them or phoning them I found the place and walked in and totally surprised them. I delivered a present from my dad and spent some hours in a very homely (in the English sense) atmosphere. Aunt Evlyn and her sister were at home when I arrived, and they offered me some English-Iraqi breakfast:)

I found out these aunties had basically gone to school together with my grandmother and lived all their lives next to our family. They have become relatives, practically. One of them taught my father in school! Later Evlyn’s son-in-law came in and he also was from a close family, he was good friends with my uncle. We had some nice chats and in the end took a photo. Despite his being in a wheelchair for about a year or so now (if my memory is good) his faith was firm and encouraging. ”Every day I say thanks to God for everything”, he said. 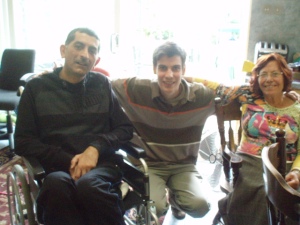 After lunch (Iraqi grandmothers are good at feeding you) I headed toward the British Library to see the most famous Bible manuscript, Codex Sinaiticus or Aleph. Below a secret photo of it – it’s dates from the beginning of the 4th century, being the first complete Bible to have survived to our days. With my own eyes I could read that Jesus is the kharakter tes hypostaseos autou (Hebrews 1:3), the very stamp of God’s nature/exact representation of his being/figure of his substance/express image of his person, depending which translation one would prefer. This has immense implications i.e. in dialogue with Islam which tells Christians to judge their message by what the Christian Scriptures reveal at the time of the Quranic message. This predates and refutes it. 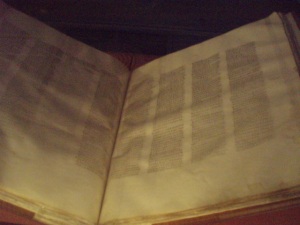 After this I visited Netherhall House, the Opus Dei residence where I stayed when I was in London four years ago. Thus I surprised even more people and also agreed about the pilgrimage I’d be going on the following day, about which you’ll read more in the next part of the story. After this brief visit I started looking for the place of my accommodation, which was Ewan and Heini King’s flat on Addison Way near Henly’s Corner. It wasn’t that simple, I got lost several times before finding it, but well at least I got a nice bus ride and a good walk in a very pretty area. After about a hundred minutes I finally found it.

Ewan and Heini used to live in Finland, Ewan actually used to teach in my high school and that’s how we met. He now teaches in a Jewish school in London and is involved in a band slowly but surely moving toward becoming professional musicians. Here’s a nice piece of Ewan’s music. And below you get an idea of the area where I stayed – a very nice neighbourhood. That’s the first day. To be continued.